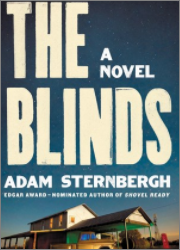 In the middle of Nowhere, Texas there’s a town full of criminals called Caesura or, as the residents call it, The Blinds. After ratting out their bosses or making plea deals, their sordid pasts were erased from their minds. They are given new names, a small home, and the rules are simple: no outside contact and if you leave you can’t come back. These ex-criminals have a chance to live out their lives peacefully and far from society. But the peace is interrupted when there are two mysterious shootings in a town without access to guns… I just didn’t buy it. I was on board with the fact that there is a facility in the middle of nowhere where mind-altered criminals live in relative peace. It was also logical that this peace would not hold, but the way nearly everything else happened just didn’t make sense. I will be flirting with spoilers, but I will do my best not to ruin anything in my rant.

We are told that the first attempts to erase memories were messier than the newer attempts. However, some of the original eight residents have varying degrees of memory loss. How were they able to target a few days or leave a specific memory in the original residents if the technology was so unrefined to begin with? If some residents remember their names or crimes then why hasn’t anything gotten out? Everyone kept their secrets for eight years when there was so little to do in the town? No one gossiped? No one said anything during a drunken night with a friend?

There’s also so many flashbacks and “telling not showing.” I got so bored listening to the dirty deeds of every character being listed off to me. There’s a lot of violence and shock value in there, but when you are hearing it second-hand and not put in the moment, it was just a dull list of crimes. I had so little investment in the characters. Since everyone also had two names it was difficult to remember who was who when nearly everyone– except a few main characters– were so forgettable.

I’m really not sure how to gripe about these next few things without slight spoilers. So, beware spoilery stuff incoming! Near the end, there are scenes where people figure out who they really are and what they have done. Everyone’s reaction to hearing their crimes is to kill themselves. Would this really be every person’s reaction? Even if you forget your crimes and traumas, there would surely be a few people who still lack empathy or remorse. Surely a few still have mental issues. This gets into a nature vs. nurture argument, but I just don’t think erasing memories would change everyone into peaceful, law-abiding citizens who gets so disturbed by their past deeds being read to them that they do not even question the truth of it and just kill themselves. And also, why did the government people with guns just not use them when they should have? Why were people spared so long or toyed with? The decisions made were just a bit silly and lacking in self preservation/common sense. Then there’s the ending… how does anyone expect that to work out well?! A lot of things felt overly dramatic in an attempt to increase tension, but it came out just feeling unrealistic. OK, spoilery stuff done!

I feel bad ripping on this novel, but I had such high hopes for it. I wanted to know more about the institute behind The Blinds, I wanted to explore the psychological issues with such a place, I wanted a real hair-raising thriller. It was just not well explained, the characters were presented in the most boring way, and there was nothing keeping me on the edge of my seat.